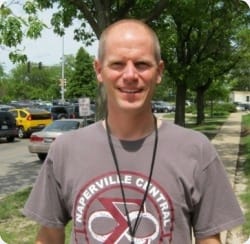 On Dave Sladkey’s first day of teaching high school math, his school recommended him two things – don’t smile, and don’t let the kids out of their seats. Since then though, Sladkey has largely shunned that bit of advice.

As a high school math teacher at Naperville Central High School in Illinois, Sladkey’s active style of teaching helps students remain engaged and eager to learn, but it took years of growth, preparation, and work for Sladkey to arrive where he is today.

“I was in junior high and helping a grade school church program and got great feedback for how I was interacting with the younger kids,” Sladkey said. “That just kind of planted the seed.”

Sladkey’s interest in teaching continued to grow throughout high school, where one of his teachers inspired him to follow his dream of teaching. His teacher’s attitude and way of working with students pushed Sladkey to enroll in a teacher preparation program at North Park University in Chicago.

Sladkey says the most striking part of his teacher education program is the insight it provided him into how other schools function. His program sent him out on student teaching assignments to three different schools. One school was in the inner city, another was in the suburbs, and another was a parochial school.

“The different variety out there was really enlightening for me to know that the education I got was special, because I felt privileged in that respect,” Sladkey said.

Sladkey remembers the differences in resources and attitudes between the schools, and appreciates that his teacher education program prepared him to work in different conditions. During his preparation, he also began to develop his outlook on interacting with students and finding the best ways to maintain a fun, yet educational, classroom.

While Sladkey says that his preparation program adequately prepared him for the content standards of teaching, but he feels it could have done a better job preparing him for classroom interaction.

“How do you treat people fairly, how do you treat people effectively and positively?” Sladkey asked. “You have to know the content to be a teacher, and our schools prepare us for that, but the people part I think is the majority of the issue. Once you have the content, all of your time is spent on how you can effectively get your message across to other people, and how to encourage them and help them.”

Today, Sladkey believes that being active with students is one of the best ways to get them to follow directions and stay on task.

“The kids know if you care and they want to please you,” Sladkey said. “They want to learn, and their motivational learning is much higher if they know you’re behind them. Creating a class atmosphere and a class personality that’s positive and encouraging is so, so important.”

This explains Sladkey’s abandonment of the “no smiles, no standing” rules first recommended to him as a young teacher. Now, Sladkey tries to engage his students in a variety of different ways to get his material across.

Sladkey advocates getting students out of their seats to release energy and refocus – all while staying on task. These “Energizing Brain Breaks”, as Sladkey calls them, can take the form of short two minute rest periods, or even classroom activities.

For example, Sladkey said recently he had his students lay on the floor and form triangles with their bodies in a trigonometry exercise. With three students each forming a different part of a triangle, Sladkey posed trigonometry questions to the class, and then had them figure out the answers from the measurements of the bodies.

“I think that cements the content better than them just sitting in their chairs doing [problems] with a pencil and paper,” Sladkey said.

Sladkey also likes to let his students lead the class while he facilitates. Usually, Sladkey presents a problem to his students, gives them time to work it out, and then has one of the students go up and explain to the rest of the class how to solve the problem.

“I find that it is more engaging than me just explaining how to do it and then they copy it,” Sladkey said. “They’re working together to accomplish the goal.”

Sladkey noted that he believes teaching is moving toward more participatory and discovery-based models, rather than the stereotypical “lecturing and notes” model. While before it was enough to listen carefully and take good notes, students must now interact more frequently with each other and the teacher in group activities.

This participatory learning is at the heart of why Sladkey loves math so much. It isn’t just sitting down and memorizing bits of information, but apply problem-solving techniques gained throughout the education experience.

By helping students to add to that toolbox, Sladkey says he feels proud to see their daily improvements.

“When the class trusts you to guide them and they respond and you know they’re working because of how you’ve established things – it all comes back down to the relationship with students and seeing them grow,” Sladkey said.

Sladksy’s methods of teaching have earned him recognition in his district. In 2007, he was named Teacher of the Year for the Naperville Community School District 203. So what kind of advice does an award-winning teacher have for students looking to become teachers some day?

“They’re going to be dealing with different people and different personalities,” Sladkey said. “I’d encourage many students who are good with people to get in the teaching profession.”