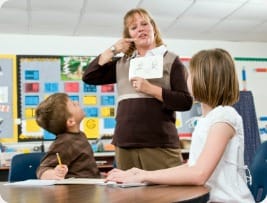 Many high school students take a year or two of Spanish as an elective class; others take French. Some take German or Japanese, when teachers are available at their school; while still others opt for American Sign Language.

American Sign Language? As a foreign language? Indeed! Contrary to popular belief, American Sign Language (ASL) is not a form of English. Rather, it is a fully developed and independent language, spoken by many people across the nation—both deaf and hearing. Unfortunately, too many schools lack a teacher who can teach it. This is where a certified ASL teacher can make a huge difference in the culture of a school—and in the lives of students who need them.

Certification establishes a minimum professional standard for teachers of American Sign Language, ensuring quality education for students of ASL in public schools. Without certification, teachers who know “some” ASL could take on basic ASL classes, resulting in inadequate or even incorrect instruction. Just as we need teachers of Spanish and Japanese to be fluent in Spanish and Japanese (rather than just knowing “some” Spanish or Japanese), we need ASL teachers who are fluent in American Sign Language.

Learning a foreign language has long been a standard component of high school and post-secondary education (although Americans are, as a whole, much more likely to know only one language than their European counterparts). Learning a second language can open up many new possibilities for students, exposing them to new communities and ideas (as well as new business opportunities, for those so inclined).

How many people use ASL?

Finding the number of speakers of American Sign Language is difficult. Most available numbers are actually a misreporting of a 1972 study that found ASL speakers to be the fourth-largest group requiring translators in court (not the fourth-largest group of speakers in the nation). Other numbers take the total population of the deaf as an estimate; but those who become deaf in old age tend not to learn ASL, while many hearing people learn ASL in order to interact with family members, friends, community, and customers.

Curiously, U.S. Census data does not count ASL users (and sometimes incorrectly codes ASL as English, which it is not). Consequently, no reliable numbers exist; common estimates vary from 500,000 to 2,000,000.

But the teaching of American Sign Language has a special importance, above and beyond the teaching of other languages. While speakers of Spanish or German have the ability to learn English, deaf individuals may never develop the capacity for fluent spoken English (although they can easily learn to read and write it); therefore, interacting with the deaf community requires a more two-way exchange. Thus, more hearing people are learning ASL in order to serve as interpreters. (This, by the way, can be a quite lucrative career; language translators have a median hourly pay of $20.82.)

Additionally, most deaf children are born to hearing parents—who, as you might guess, are not already fluent in ASL. This means that deaf children often get the bulk of their ASL instruction at school, and that college and community classes are needed for parents who wish to be able to speak with their deaf or hearing-impaired children.

If you already have a teaching credential in another subject, you may add a certification or endorsement to teach American Sign Language. However, doing so may still require taking a minimum number of units in ASL.

One Step Beyond: Teaching the Deaf

ASL teacher certification is for teaching American Sign Language to students (both hearing and deaf), but suppose you want to teach other subjects, such as history or biology, in ASL?

For that, you’ll need to complete a Deaf Education teacher preparation program, in order to learn effective techniques for teaching classes of deaf and hearing-impaired students. You can find schools offering such programs at DeafEd.net.

Many states recognize certification by the American Sign Language Teachers Association (ASLTA); some states, such as Florida, require it. ASLTA offers several levels of certification: provisional, qualified, and professional. In order to obtain ASLTA certification, you’ll need a minimum of five years’ experience using ASL on a daily basis. Additional requirements can be reviewed on the ASLTA website.

Many people know a number of individual words in American Sign Language—in fact, it is common for parents to teach their children some basic signs, such as “please,” thank you,” and “more” before they are capable of speech. However, teaching ASL as a language goes far beyond mere vocabulary. American Sign Language has its own grammar, syntax, phonemic base (although with gestural instead of spoken components), and set of pragmatics (the component of a language that involves rules of context, such as the level of precision when reporting numbers, and how answers to questions change in different contexts). Your advanced study of American Sign Language will take you far beyond basic communication, and into these details and foundations. This will enable you to understand variations and inflections in the language, and teach beyond a simplified one-to-one word correspondence.

Additionally, you’ll learn about the important cultural components of the language. In other foreign languages, students learn some about the cultures of origin, and how some cultural patterns or expectations affect using the language; ASL is no exception. In this case, you’ll be learning and teaching about deaf culture, including the history of the community’s struggles, how the community is formed and maintained (since deaf children are often born to hearing parents, and deaf parents often have hearing children), and what rules govern passage into and out of the culture. Such a knowledge is very important for learning proper etiquette in using signage, and being able to effectively translate (interpret) between English and ASL.

How you’ll impact your students and schools

Since deaf children can be born to hearing parents, and hearing children to deaf parents, deaf communities develop differently than communities formed by other languages. Therefore, the use of sign language is more dispersed than localized.

Nonetheless, teaching American Sign Language often has a greater immediate impact on students than teaching French or German, as students are more likely to have family, friends, or neighbors who use ASL. Additionally, you’ll raise awareness of this language and community, so that more people come to recognize this distinct and creative language—instead of simply mistaking it as a form of English for deaf people.

The developing language of ASL

American Sign Language is a recent creation, first developed in the 19th century. Before the advent of ASL, deaf people often communicated in idiosyncratic home-based sign languages, or in village sign languages where larger numbers of deaf people were present.

The development of a standard American Sign Language began in April 1817 at Connecticut Asylum for the Education and Instruction of Deaf and Dumb Persons (now called American School for the Deaf), influenced by Old French Sign Language as well as sign languages used in American communities in Martha’s Vineyard, Henniker, New Hampshire, and southeastern Maine, as well as the home sign used by students coming to the school. As schools for the deaf spread, American Sign Language began to standardize; and in 1880 the National Association of the Deaf was founded, providing another means of stabilizing the language (although regional dialects continued to exist).

ASL is a natural language (as opposed to a constructed language), with its own grammar that evolves through use. However, it was not until the 1950s that linguists really began examining ASL, recognizing it as a full-fledged and independent language. Today the language (and its regional and ethnic variations) continues to evolve, adding new vocabulary and experiencing other changes in phonology and syntax over time.

In writing, ASL is almost always translated (or glossed) into English; but ASL and English do not have a one-to-one word correspondence, and English has no way of representing inflectional modulation in ASL signs. Several attempts at developing a written form of ASL have been made, but none have a great following. The Stokoe notation, developed in the 1960s, is only used in academic circles. Sutton Sign Writing is currently the system with the most use, including in use in some college newsletters and in the captioning of some YouTube videos; and is in at least partial use in some 40 countries.

As speakers of American Sign Language continue to interact with speakers of other languages across the globe, ASL will continue to change and evolve. Teachers of ASL will themselves never stop being learners of the language, as the language adds new words and continues to expand to more people—deaf and hearing alike.